If one of your main criteria for a 2-in-1 laptop is pen-to-screen capability, Lenovo makes a compelling case for your money with the ThinkPad X1 Yoga. It’s a serious business tool dressed in gray aluminum, the only notes of relief being the red trackpoint in the center of the keyboard and a backlit dot above the ThinkPad “i” on the lid. It’s classy, ​​understated and a bit boring.

It’s also incredibly well made, with no trace of flex in the metal lid or chassis. Lenovo confirms this with MIL-STD-810H testing, so you know you can use this laptop even in harsh environments like deserts without fear of failure.

Lenovo achieves this robustness despite the slim dimensions. It is 15mm thick, with beveled edges to give it an even more slender feel from the front. Ports aren’t sacrificed either: you’ll find a full-size HDMI 2 output on the left alongside a USB-A 3.1 port and two Thunderbolt 4 ports; the one closest to the rear also serves as a power input. Head to the right and you’ll find a second USB-A 3.1 port, a 3.5mm jack, and a Kensington lock slot. There’s also a slot for a parked stylus.

Lenovo doubles down on biometric security by integrating a fingerprint reader into the power button, while an infrared webcam supports Windows Hello for hands-free logins and a built-in privacy cover. It’s a shame Lenovo hasn’t upgraded the webcam to 1080p or higher, as 720p resolution doesn’t match dedicated webcams.

Image quality is poor, with poor compression and color. The Yoga’s strong point here is its excellent microphone system, with four built-in far-field mics to capture your voice clearly rather than background sounds. Lenovo pairs these mics with a nice pair of speakers, which sit on either side of the keyboard to create a stereo scene. I would be very happy to listen to music on these while typing on a long document.

READ NEXT: Check out some of our favorite PC speakers

That brings us to the keyboard, which lacks the luxurious deep travel of the ThinkPads of yore, but is still a high-quality offering. It wins for the size and contour of the keys – they are natural under the finger – and its absolute silence. Even the heaviest typists won’t bore their companions with the X1 Yoga.

Lenovo pays particular attention to the function keys at the top, with grouping to make them easier to hit as well as dedicated keys for Home, End, Insert and Delete. Then there’s the double-height Enter key and the elongated spacebar. Note the mouse buttons placed just below the keyboard, particularly useful for those who still use the trackpoint, and although this results in a smaller trackpad (110 x 57mm), few people will complain about it.

It’s useful to be able to pull out the previously mentioned stylus at any time, whether it’s annotating a PDF, signing a document, or drawing on the screen. Take note, however, that its size is reminiscent of the styluses found with Palm Pilots rather than a chunky Apple Pencil. The bigger your fingers, the harder it will be to hold it.

READ NEXT: These are the best USB and wireless keyboards to buy

Lenovo ships four different IPS panels with the Yoga Gen 6, so be careful when choosing your model. I tested the high-end 3840 x 2400 version with HDR400 certification, rated peak brightness of 500 cd/m² (I measured 531 cd/m²) and the promise of DCI-P3 coverage of 90 %. The reality even exceeded that expectation with 97% coverage and a superb maximum Delta E of 0.58. This results in superb accuracy. 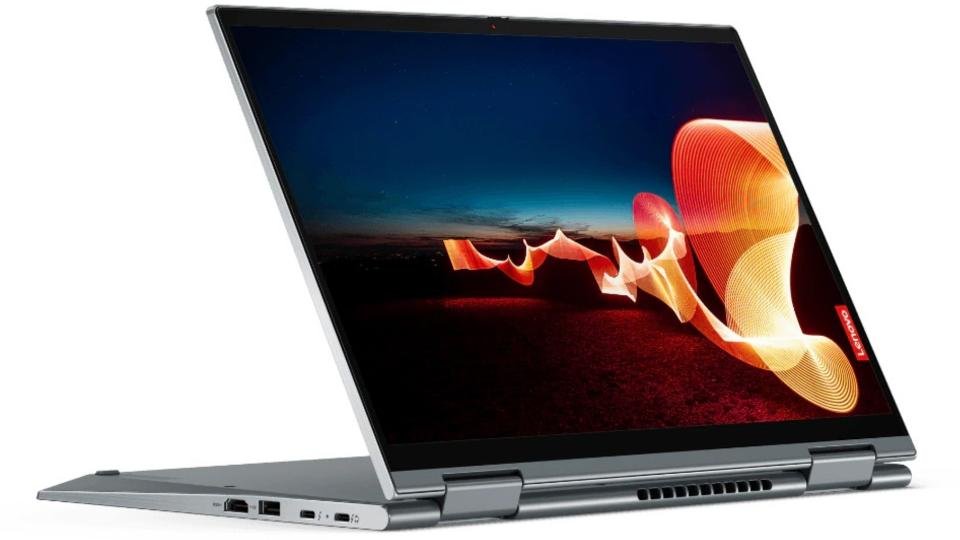 The other three panels Lenovo offers won’t be as good, with no promise of color coverage, and also note their lower resolution of 1,920 x 1,200. That translates to 162ppi, which is crisp to the human eye at distances of 21 inches and more, so if you normally look at your laptop screen at arm’s length, it will still look sharp.

However, if you can afford the higher spec panel, choose it. Not just because of the greater color coverage, but because in tablet mode you’ll likely be working at quarters closer than arm’s length. That being said, the case for the ThinkPad as a tablet is weaker. While a respectable 1.4kg weight for a 14-inch laptop, it’s not a machine you’ll want to hold in one hand for long.

Where Lenovo is way ahead of the pack is in power. Although the fan rarely tops a low drone, it proved to be a star performer in our benchmarks. A score of 159 is exceptional for a Core i7-1165G7, and one of the reasons is the superb PCI-E SSD 4: it returned 5,450 MB/s in the AS SSD sequential write test and 3 547 MB/s for reads. 16GB of RAM always helps, but note that this is soldered down and not upgradable.

The Yoga relies on integrated Iris Xe graphics, but again we saw results at the pinnacle of this accelerator’s abilities. A 51fps at 1080p in Metro: Last Light is strong, as is 41fps in F1 2020 and 67fps in Dirt: Showdown. The only downside compared to some recent laptops is an 8 hour 29 minute video score in our battery tests. I was hoping for ten hours or more, and Lenovo promises 15 hours of light use. Still, the AC adapter won’t take up much room in your bag and it weighs only 350g.

READ NEXT: These are the best gaming laptops to buy today

So, to the big question of whether you should buy the X1 Yoga – and an uncomfortable conversation about pricing. If you want the screen I tested, your only current option on lenovo.com is a customizable model which comes in “over six weeks” and costs £2,410. It is with Windows 11 Pro 64 operating system, 32 GB of RAM and a 1 TB SSD. The exact specification I tested, with part code 20XY004BUK, is not available, which is too bad because it also supports 4G; it’s a £140 upgrade from Lenovo’s website, or you can buy 5G for £400.

If your IT department offered you the X1 Yoga Gen 6 as a laptop, I wouldn’t hesitate: it’s a great convertible laptop despite the little weaknesses I’ve pointed out. I just hope they can negotiate a better deal than what is currently being offered directly by Lenovo.