Special to The Mississippi Link, 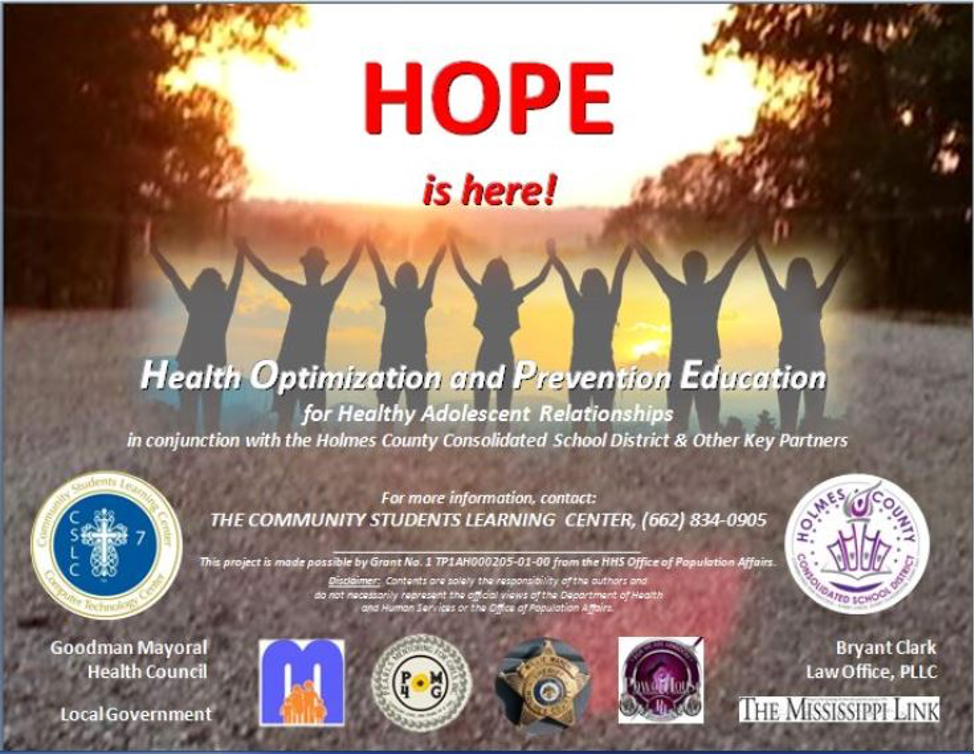 As the COVID-19 pandemic is at the center of the scene and alarming public health today it is also important to remember that HIV and AIDS also remain a major global public health problem.

December 1 has been World AIDS Day since 1987. This year’s theme is â€œEnding the HIV Epidemic: Equitable Access, Everyone’s Voiceâ€.

It is a day of solidarity, representing an opportunity for people around the world who are affected by HIV to share their stories and experiences, to remember those who are lost and to highlight efforts on all fronts to put end of the HIV epidemic (cdc.gov).

In an effort to give more voice to awareness, the Health Optimization and Prevention Education (HOPE) project at the Community Students Learning Center (CSLC) in Lexington, Mississippi, recently collaborated with the Mallory Community Health Center (MCHC) to host a virtual informational pre-World AIDS Day.

HOPE is federally funded by the US Department of Health and Human Services (HHS) Office of Population Affairs (OPA) Teen Pregnancy Prevention (TPP) in grassroots partnership with the Holmes County Consolidated School District (HCCSD) and MCHC , and other community partners. The pre-World AIDS Day activity was part of the parent / community component of HOPE called â€œLet’s Talk Relationshipsâ€.

Brown-Jones’ presentation included inspiring statistics on people living with HIV in Holmes County, Mississippi. See a review of the five-year data below:

At the mention of the strong increase between 2018 and 2019, several spectators were heard mumble with astonishment.

CSLC HOPE host Lucretia Holmes and audience participant Laletrice Fletcher both later expressed their alarm at the 2019 increase in the number of people living with HIV in their county. “I was shocked.” said Fletcher.

In terms of prevention and / or intervention, Brown-Jones also later stressed that “young people and adults need to be aware of current statistics on HIV in the region, types of condoms, appropriate use. condoms and prEP (pre-exposure prophylaxis) drugs. Appropriate condom use and taking prEP have been shown to reduce the risk of infection. People living with HIV / AIDS should receive routine medical care and take medications daily to lower their viral load and minimize transmission.

The participating parents later recognize how much they enjoyed the presentation. â€œDr. Brown-Jones was educational and she made some important points about the stigma of what people think about HIV,â€ said Kadisha Clark, parent of HOPE.

Clark’s teenage son is one of more than 1,000 HCCSD Grades 6 to 12 students who have been trained (with parental consent) since fall 2019 on the importance of developing and sustaining healthy relationships with adolescents. She made sure he was on call.

â€œToday a lot of people are being misled because of what the world thinks of as HIV instead of being really informed about what it is. Understanding is the best lesson. So if we’re better educated on these types of things, we can come together and help make the world a better place instead of judging, â€Clark said.

Brown-Jones agrees that â€œBy working together, we will make tremendous progress in breaking down the stigma surrounding HIV / AIDS and raising community awareness to help reduce the overall number of people contracting HIV. “

Holmes said: â€œAwareness of AIDS, other STDs and STIs reminds us that they still exist and that people always test positive. Being aware prevents us from engaging in risky behaviors and learning what treatments and prevention are available.

Brown-Jones announced that on Saturday, December 4, from 10 a.m. to 2 p.m., the MCHC will celebrate World AIDS Day 2021 with a carnival featuring health screenings, information, exhibitors, cash prizes and Moreover.

Brown-Jones said she was grateful for the partnership between MCHC and the CSLC Hope program.

â€œWe are also grateful to the CEO of MCHC, Dr Chapman and staff, HCCSD superintendents (past and present), school leaders, teachers and all community partners,â€ said Beulah Greer, administrative officer of HOPE. â€œOur parents, along with our community partners, have been a true village, championing the cause to help our young people develop healthy relationships.â€

Upcoming Hope event: â€œLet’s Talk Relationships: Dangerous Love,â€ Tuesday, Dec. 14, 6:30 p.m. with Featured Presenter, Jackson, Miss. Wendy B. Mahoney, Executive Director of the Mississippi Coalition Against Domestic Violence. Families in the area and anyone interested can zoom in to be informed. Cash and other sweepstakes available. Meeting ID: 876 0680 2000 Access Code: 975714

The HOPE project is made possible by grant n Â° 5 TP1AH000205-02-00 from the HHS Office of Population Affairs. The content is the sole responsibility of the authors and does not necessarily represent the official opinions of the Department of HHS or the OPA.

Police officer accused of raping woman he arrested for DWI

Can monkeypox be sexually transmitted? Virus in sperm spark questions